Join us in honouring this brave Canadian trailblazer! 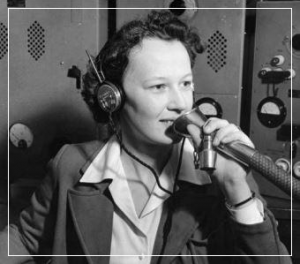 Famous Canadian sculptor Tyler Fauvelle (see samples of his work below) has been commissioned to create a full-size sculpture paying tribute, not just to Fern Blodgett Sunde, but to all Canadian naval members and merchant mariners who served at sea during the Battle of the Atlantic.

THERMOMETER – Thanks to so many generous donors we have reached our goal!

The Fern Blodgett Sunde statue was unveiled on Saturday, October 17, 2020.  The ceremony was recorded and can be accessed at: 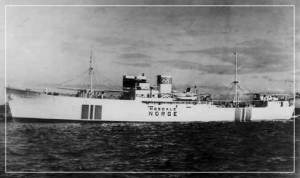 • First to serve at sea

• First of 22 women who served on Norwegian merchant marine

Fern Blodgett grew up in Cobourg, often looking out over the waters of Lake Ontario, dreaming of becoming a sailor. But growing up she learned that only boys could work at sea. When WWII started she thought she could become a wireless radio operator. The first two schools she applied to turned her down because she was a woman. But Fern Blodgett was a persistent woman, and a third school, the Radio College of Canada, accepted her. 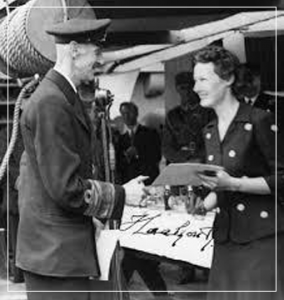 Battle of the Atlantic

Even with her professional wireless operator’s certificate in hand, the Canadian and British navies would not hire her- because she was a woman.

Then she applied to a Norwegian merchant marine vessel, the Mosdale, which was in desperate need of a wireless operator. They granted her an interview as F. Blodgett, not realizing F. stood for Fern. She was hired – even though she was a woman.

The Battle of the Atlantic was in full swing. Fern Blodgett Sunde made 78 crossings of the Atlantic on the Mosdale, avoiding submarines, receiving and sending coded messages and delivering desperately needed supplies. 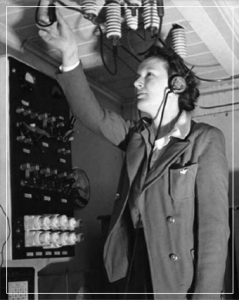 This was a remarkable achievement. In 1943 Fern was honoured by the King of Norway, becoming the first women to be awarded the Norwegian War Medal for courage and contribution to the allied war effort.

Fern Blodgett was born in Saskatchewan but at 6 months moved with her family to Cobourg, Ontario.

They lived in this home on George Street, just a short walk to the Lake which started her dreams.

It is here on the shore of Lake Ontario that the Fern Blodgett Sunde statue will stand, beside the lake, the beach and a walking trail.

Fern Blodgett Sunde was the first in her field. She paved the way for other Canadian women to become wireless radio operators (Sparks), and serve at sea. She was determined, courageous, and resilient, and along with other members of the Merchant Navy was willing to sacrifice her life in service to her country. 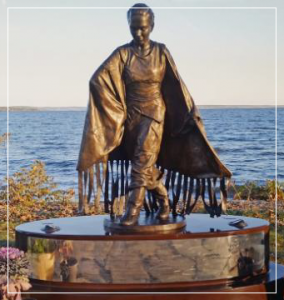 The Canadian Enyclopedia – The Battle of the Atlantic

Experience in the Merchant Navy